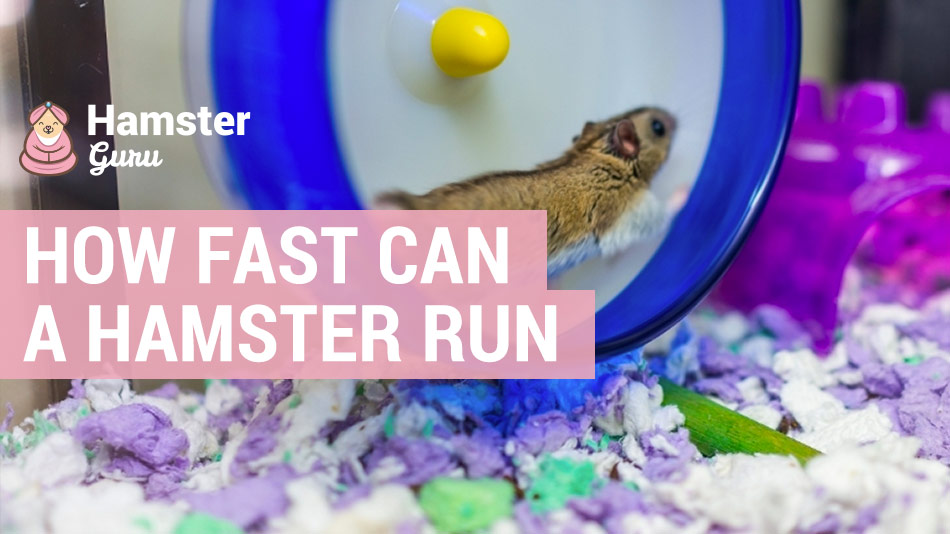 So, if you have yourself a pet hamster and you have seen it running around its cage or in its wheel frantically, then it is pretty clear that hamsters can be speedy when they need to be. But, the question we are looking to answer here is: how fast can a hamster run?

A hamster can run as fast as 6 miles an hour with the Syrian hamster having the quickest paws of them all.

Just how quick can a hamster run?

The short and simple answer to how fast can a hamster run is anywhere between 3 and 6 miles per hour. This includes the super small hamsters too, such as your Dwarf and also your Syrian hamsters too.

In fact, Syrian hamsters are the fastest of all the hamster species – so if you have one of these as your pet, then you might have your own hamster equivalent of Usain Bolt!

Hamsters And Their Speedy Paws

So, here are some more hamster and speed related facts…

Are you surprised by this? Well, you really shouldn’t be! Hamsters are actually built for being quick on their feet… or should we say paws due to their primitive origins.

That’s right, hamsters have not been in cages since the dawn of time. They are equipped to dodge, hide and escape from predators – so actually, hamsters are more agile than they are speedy.

Why Do Hamsters Run?

We can tell you that hamsters actually have two main reasons why they will put a bit of a spurt on and go to the extra effort of running.

Hamsters will only go to the trouble of running (we say trouble because these guys are pretty small so it is a lot of work for them to get a move on) either due to predator pressure or because they are getting territorial.

What do we mean by predator pressure? Well, hamsters have not always been domesticated pets. They used to have to survive in the wild, and they will just run out of pure instinct.

So, if you find yourself getting woken up one night because your hamster has decided to run on its wheel late at night then it is because somewhere within their instincts, they feel the urge to do so.

Sadly, hamsters fall into the prey category which means that when they were in the wild they were pretty vulnerable. In turn, this meant that hamsters had to develop quick reaction times and be able to sense when they were in danger, so that they knew when to run away.

Thinking back to being in the wild, of course hamsters have to be speedy but they also have to be strategic and therefore pretty agile so that they can escape.

You might notice that your hamster will take breaks when it is using its wheel, and this is because when they were in the wild they would have needed to pause in order to work out where their predator was lurking, which would in turn give them time to calculate where to run to next.

Hamsters are pretty small, so they need to be able to outsmart predators of all different sizes. Sure thing, it is important for your hamster to be speedy – but you can give it more credit than just being fast.

Your hamster is pretty smart, because it has to know how to avoid an attack, how to make last minute route decisions and also they have to be able to pick up speed pretty quickly.

When it comes to territory, again before you had your hamster as a pet, they were used to being foragers in the wild. They had to be able to find a home that was safe, that was not too far from a food supply, and also close to other hamsters so that they would eventually be able to mate.

Of course, different hamsters will require different size spaces in order to live quite happily. This is evident in the different size cages that we purchase for our pets. So, even though these creatures are pretty small they can really cover a lot of ground when they need to.

Hamsters are pretty active creatures, and they work hard to collect food and store it all away so that it lasts them for a prolonged period of time. Obviously your pet hamster will not need to do this, but you might notice that they hide some food under their straw and this is to save it as a backup energy food supply.

Making Sure Your Hamster Has Enough Exercise

This could be a hamster wheel, because let’s face it this is a classic staple for anyone who has a pet hamster, or there are a variety of different hamster chew-toys that you can get. This is great for their teeth and again is a great distraction for them. They can play and also be challenged. For inspiration on the best hamster cage accessories, why not take a look at our review guide?

So overall, your hamster can be pretty speedy – and this can seem surprising but it is actually part of their nature. They are the prey in the animal world, and so they have the instinct to move fast and adapt to their surroundings pretty quickly.

So, we strongly advise that you do not let your hamster out of your sight because, well, it might be pretty hard to catch them!