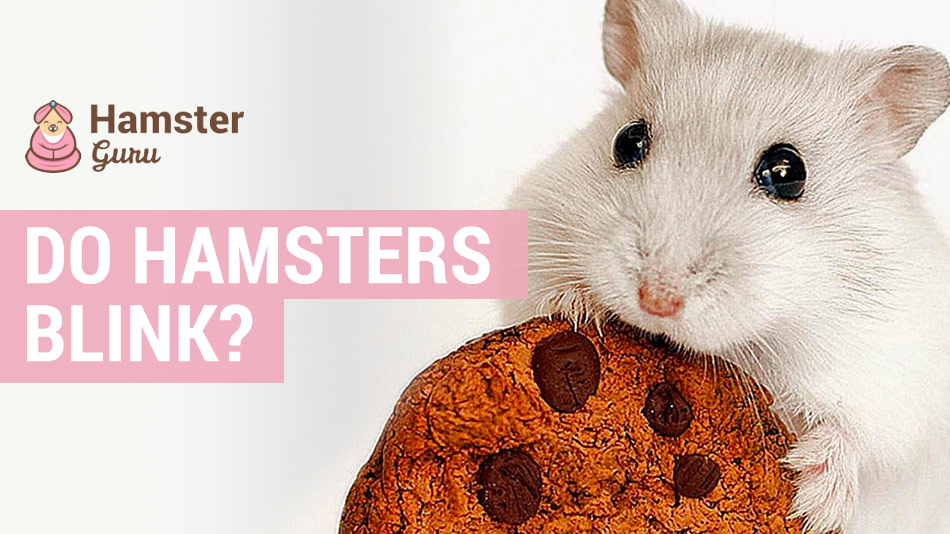 In all the time that we have had Oscar, I have never seen him blink. He will quite happily sit and stare into the distance or close his eyes for hours on end whilst he visits the land of nod, but never does he flutter his eyes. It turns out, however, that at some point between eating, sleeping and staring, hamsters do blink.

Hamsters do blink, but rather than closing both of their eyes at the same time, they close one eye at a time – a little bit like a wink. Hamsters shut alternate eyes so quickly that if you blink, you’ll miss it!

But why don’t hamsters blink with both eyes and how many times a minute do they perform a one-eyed stare? Below I look into the facts behind the way in which your hamster blinks.

Why do hamsters blink with one eye?

It is very normal when you first start to bond with your hamster for them not to attempt to blink at all. Instead your hamster may be fixated on a specific spot searching for things that could upset their status quo.

This is because hamsters actually have very poor eyesight and, in the wild they have to rely heavily on their other senses, using touch, sound and smell to guide them. In order for hamsters to ensure that they are well protected against predators they keep a watchful eye out at all times – even when it comes to blinking.

Although your hamster is not in any danger whilst in your care or safely ensconced in their cage, it will still have the same basic instincts and habits as their wild ancestors, so blinking with one eye is perfectly normal for your pet hamster.

How often do hamsters blink?

Scientists believe that the average person blinks around 15-20 times per minute – which is 1,200 times per hour and a staggering 28,800 times a day!

Humans and animals alike (except fish, snakes or those without eyelids) need to blink in order to keep their eyeballs moist and to remove dust, dirt and debris. It is an important movement that is undertaken subconsciously on a “when required” basis.

This is exactly the same for hamsters, however, thanks to a layer of lubricant that covers their eyes they are able to go for longer periods between blinks. Also, as most hamster are crepuscular, (choosing to venture out at dawn or at dusk), they are not subjected to the direct rays of the sun. Therefore, their eyes are able to retain moisture for longer.

There have been many studies into the patterns and processes of animals blinking but there is no definitive answer on the specific number of times a hamster blinks (or certainly none I could find).

That said, a study by W.P Blount in 1923 into the movements of the eyelids of animals: blinking, confirmed the fact that hamsters wink rather than blink, closing one eye at a time, whilst monkeys blink rapidly, rats only blink when they sneeze and goats blink at regular intervals of 30 to 60 seconds. Who knew?

Do hamster have good eyesight?

I often feel like Oscar is trying to stare me out, playing a simple game in which the first person to blink is out. He inevitably wins every time, due to his ability to avoid eye contact and stare into space.

What in fact Oscar is trying to do is work out what the world around him is up too. Compensating for what his eyes are unable to see clearly, he uses sounds and smells to recognize other hamsters, humans and suss out situations.

Hamsters, like a lot of other animals, are born blind and their eyes don’t really progress much past being able to focus a few inches in front of their nose. Your hamster’s poor sight is often the main factor behind its unpredictable behavior. Unable to tell the difference between fingers, food or potential predators, there is a chance they may bite as a form of defense or mistaken identity.

This is why it is so important that you move slowly around your hamster, speak quietly at all times and encourage your hamster to find their own way to you.

If you are interested to know more about how good your hamster’s eyesight really is, whether they can see in the dark and if they are colorblind, then check out another one of our informative blogs.

Excessive blinking in humans can often alert us to medical issues and the same can be said for hamsters.

It is unlikely that you will notice your hamster blinking on a day to day basis, but if you suddenly notice them shutting their eyes rapidly or unable to open them, then there may be a problem.

One of the most common eye problems in hamsters is pink eye, otherwise known as conjunctivitis which occurs when the eye’s outermost layer becomes inflamed.

When hamsters blink or nod off, their eyes secrete fluid to keep their eyeballs moist. Occasionally this fluid drips out and dries in a crust around their eyelids, preventing them from opening. This is generally not a veterinary emergency, and something that can easily be treated at home with some warm water and cotton wool.

If your hamster does have pink eye, we would strongly suggest that you try to find the cause behind it. For us, it was as simple as changing Oscar’s bedding from the cotton based variety to a paper based one.

The next time you get your hamster out for a hold take a good look at its glassy eyes and you may be lucky enough to see a one-eyed blink. If you don’t, there is no need to worry as hamsters can easily hold their stare for many minutes.

You should constantly take the opportunity to check your hamster is in good health and that includes making sure that their eyes are clear and bright. Although through blinking your hamster should be able to make sure they are well moistened and clear from dust and crust, they may need a helping hand if the eye becomes infected.

link to Why does my hamster poop so much?

Considering that hamsters are such small animals, they create a lot of mess. If they are not digging or shredding the contents of their cage in order to make a comfy bed, then they are foraging for...

Continue Reading
link to What is the difference between a guinea pig and a hamster?