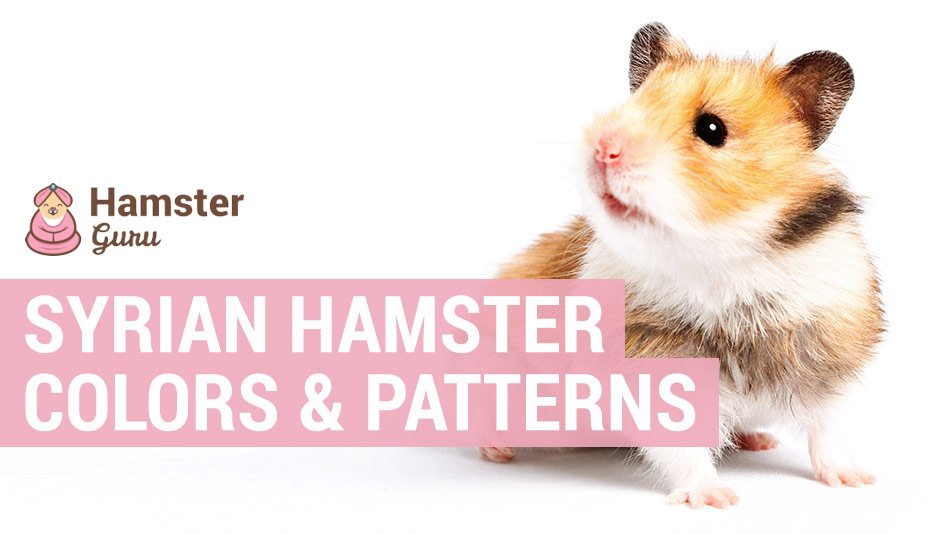 We can firmly blame Oscar for the increase in demand for hamster sales in our area. As he is incredibly cute, cuddly and tame he has unknowingly convinced many a child to beg their parents for a pet hamster. What I have observed, however, is that having previously assumed that all Syrian hamsters had golden fur, that they do in fact come in a spectrum of colors.

Wild Syrian hamsters were originally golden in color which is how their name was derived. But, thanks to advanced breeding techniques Syrian hamsters are now available to buy in a host of colors, patterns and with different coat types.

Syrian hamsters have solid, barrel-shaped bodies and stubby tails. Their ears are round and paper-thin whilst their eyes are small, dark and glassy. Their paws are petite, but their claws are sharp and although they look cute, cuddly and unassuming, Syrian hamsters can be quick, agile and fierce when they need to be.

Syrian hamsters tend to grow between 4-7 inches long, with females being slightly larger in size than their male counterparts.

Although Syrians are traditionally known as golden or teddy bear hamsters; due to their color variants and some clever marketing, it is not unusual to find some Syrian hamsters sold in pet stores under the alias of black bear or panda bear hamsters.

Each species of hamster has its own coat colors, textures and patterns, but it is the Syrian hamster that has the greatest variety. This is because it has been bred for much longer, and therefore has the greatest number of mutations. These include:

Depending on the amount of testosterone a male has, will affect the length of his flowing skirt (its long mane of fur). Female long-haired hamsters, however, have shorter fur and tend to have tufts behind the ears, on the hips and around their posterior.

Satin coated hamsters have a glossy shine to their coats, whereas the rex gives Syrians a wave in their fur.

There are many different patterns that can decorate your Syrian hamster’s fur. These include solid, roan, banded, dominant spot and tortoiseshell.

Oscar has a solid pattern of fur, and his coat is a golden color all over. Although when you tip him gently up, he can see that his tubby belly is a little lighter in color.

A roan hamster looks like a white hamster with color splattered from their head to their rear. Whilst some are covered in a multitude of different colors, others have little variation at all. Their ears will be mottled, and their eyes give off a reddish glow.

The banded pattern is perhaps the most common, with these hamsters having a white band circling their middle. The pureness of the band is completely random with some having smudges smears and spots of color separating them.

A dominant spotted hamster has a white body with colored spots splurged all over it. It is not uncommon, however, for there to be more color than white and for the ears to have little dots on too.

Only female hamsters can have a tortoiseshell coat, and these tend to be dappled with patches of yellow and white. These types are perhaps the least common to find.

Hamster colors are generally known as either agouti or self.

An agouti hamster has cheek flashes and crescents with a lighter colored underside. You tend to see these in colors of golden, rust, cinnamon silver and grey.

A self-hamster, however, is the same color all over and these are popular in black, chocolate, cream, mink and sable.

Do male and female Syrian hamsters differ in color?

Although only a female hamster can have a tortoiseshell coat, the sex of a Syrian hamster does not generally dictate its color. Therefore, in order to tell the difference between a male and female hamster, you should look at the flank glands and their private anatomy. Read our blog on how to tell the sex of your hamster to ensure that your pet hamster is sexed correctly.

Syrian hamsters tend to undergo a slight color change as they mature – a bit like humans do – so it is nothing to be alarmed about. As long as it doesn’t happen overnight, or your Syrian doesn’t suddenly go bald or starts to shed their fur, then this isn’t a health issue.

The color of a Syrian hamster’s eyes and ears are usually determined by the color of their coat. Some coat colors have several different eye and ear color combinations, such as the cream variety which can have black, red or ruby eyes.

If you have a Syrian hamster that is blonde, cinnamon, lilac, honey or fawn then these often have red eyes. Some colors such as mink and copper have red eyes which tend to darken with age whilst some hamster’s have odd eyes, also known as heterochromia.

Just look out for conjunctivitis in hamster, also known as “pink eye”, due to color appearance of the irritated eye.

One size does not fit all when it comes to buying a Syrian hamster. Not only do they vary in color, coat types and eyes, but in temperament too. Although traditionally known as the golden or teddy bear hamster, Syrian hamsters’ names are now changing to reflect the different breeds that have arisen through breeding.

link to Why does my hamster poop so much?

Considering that hamsters are such small animals, they create a lot of mess. If they are not digging or shredding the contents of their cage in order to make a comfy bed, then they are foraging for...

Continue Reading
link to What is the difference between a guinea pig and a hamster?